The average historical snowfall on Mt. Washington for the months of October (17.6in) and November (37.8in) sit well below this season’s current totals; unofficially 100+ inches from late October through mid-November. Interestingly, this precipitation outlier was accompanied by equally as strange low wind speeds (based on data gathered from unscientific but incredibly fun “fieldwork”). Additionally, the macro and micro wind directions distributed snow in an atypically even fashion across the higher terrain (which is normally beaten into boilerplate loud pow) making the snow not only edge-able, but actually SOFT. The combination of all these variables leads to one undeniable conclusion; it has been a hell of a start to the 2018/19 East Coast backcountry ski season. 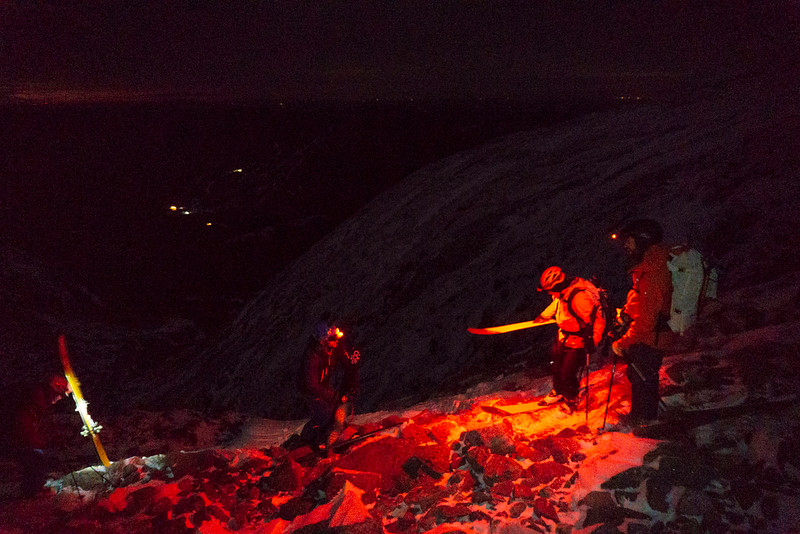 Any mountain or outdoor enthusiast knows that it’s one thing to have the weather stars align, but it is a whole other complex matrix trying to align day-to-day responsibilities with skiing opportunities. Navigating this dynamic puzzle is an art form born from year’s of dawn patrols, rapid calculations of estimating driving, climbing, and skiing times, and on more than a few occasions having to apologize to loved ones whose needs were placed below that of schussing down steep slopes. So, despite what Instagram says, the process of getting to the mountains isn’t linear or easy and a lot of dumb luck is involved. Fortunately, it seems all of the offseason prayers to Skadi and Ullr (the Norse goddess and god of winter) paid off because somehow whenever the conditions were optimal time was also available (as long as one was willing to wake up early).

The first foray into the backcountry occurred on October 27th. A wake up time of 12:00am meant that we were at the top of left gully well before the sun crested the horizon. The ensuing adventure was one for the books and thankfully was artfully recorded by Connor Davis in his article for Freeskier Magazine (thanks, Connor!). 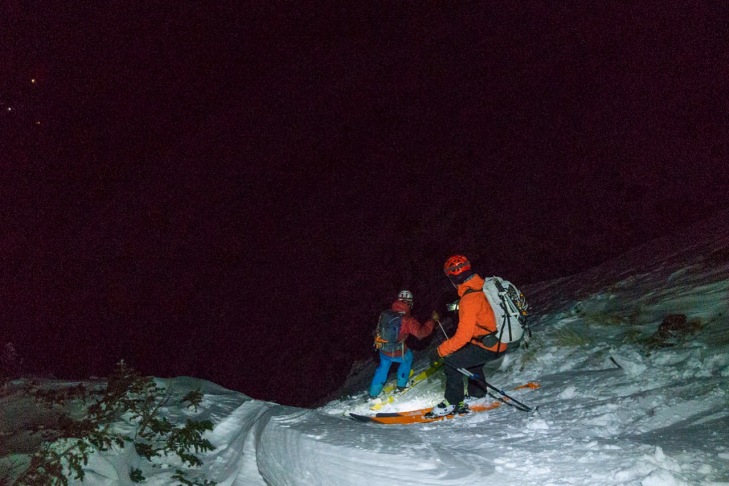 Driving back to Portland I sunk into the endorphin filled buzz that is the frequent byproduct of ski adventures. I felt satiated, amazed, and incredibly appreciative of good friends and ski partners. At that point I was fully prepared to return to putting in time at the gym for another five to six weeks (at the least) before having another opportunity to ski big terrain. The universe had other plans.

On November 17th, 18th, and 21st not only were we able get back to the mountain, but we were able to ski lines typically reserved for a mid-winter or spring snowpack. The 17th was a solo mission into Tuckerman ravine to do a little data gathering below Right Gully and Sluice. Unsurprisingly, a reactive wind slab was found in numerous locations across the S/SE facing slopes. These results prompted serious conversations among the crew about acceptable objectives for the next day, and what we needed to see (or not see) in our data gathering. Fortunately, after many hasty pits, thoughtful conversations, and cautious route finding, we were able to ski central gully in truly “all time” conditions. The day was made even more special given that it was Ryan Dunfee’s first time riding in Huntington (aka Hunting-man) ravine. As you can see….he crushed it. 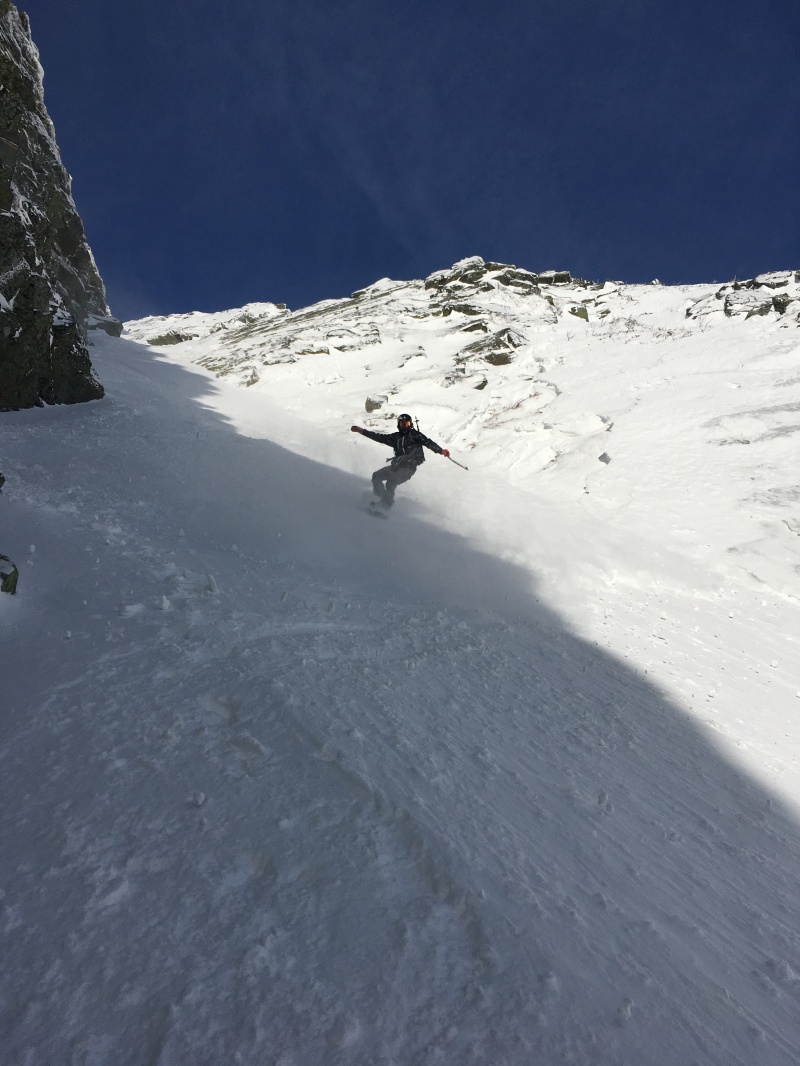 Now, not only did Central ski well, but the snowfields on the summit and Chute in Tuckerman Ravine also provided incredible skiing. Meanwhile, the Sherburne Ski trail was skiable (properly) all the way to the car. Again, if we just ended there it would still be a historic start to the year, but the aforementioned Norse deities had one more pre-Thanksgiving gift. On November 20th Forrest Frizzell (the captain of stoke) and I hit the repeater button and skied Central Gully again before the incoming snow increased avalanche danger to the point of avoidance. Having a full alpine “breakfast” for the third time in four days in NOVEMBER was beyond what any of us could have dreamed of. 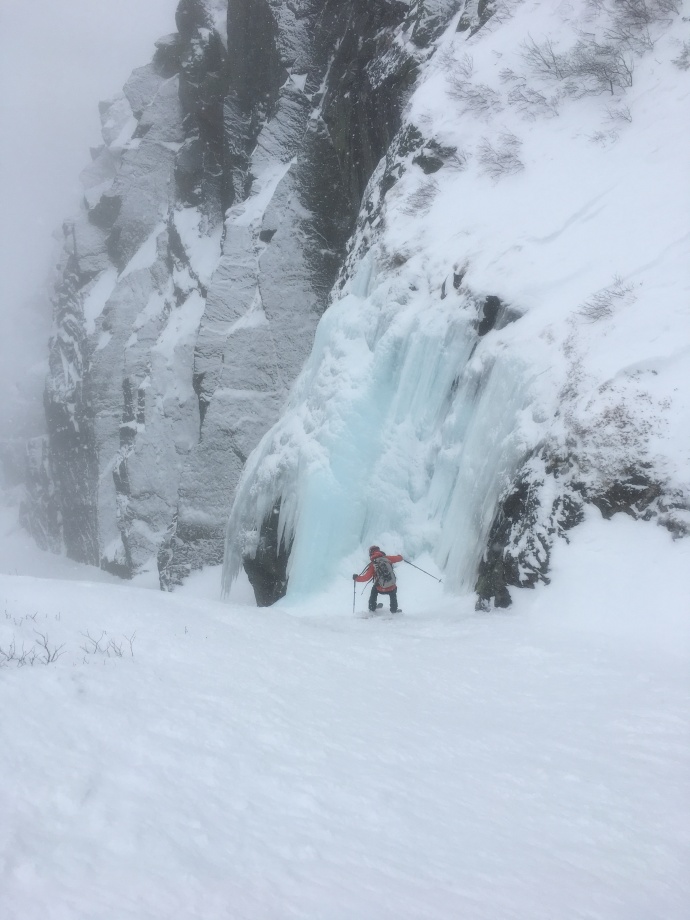 Writing this, I am surrounded by a loving family, an abundance of food, fires, and good books. It is idyllic, more than I could hope for, and I struggle to comprehend the anomalous profusion of good fortune on and off the mountain. All I can do is express unending gratitude to the people and places that continue to make my life full of adventure, beauty, and love.

Odell’s Gully is officially listed as WI2-3 (named after the famed Noel Odell who was the last person to see George Mallory alive) and was in full force on December 1st. After some “warm up” laps on Central Gully and Diagonal, Ben Leoni, Hanna Lucy and I felt it necessary to explore the aforementioned couloir to test it’s skiability….we weren’t disappointed.

It should be noted that this was also Ben’s last day skiing on the East Coast and as you can see in the photos and videos below he crushed it.

Fingers crossed and prayers out to Skadi and Ullr for more of the frozen precip!!

On the way up Central. 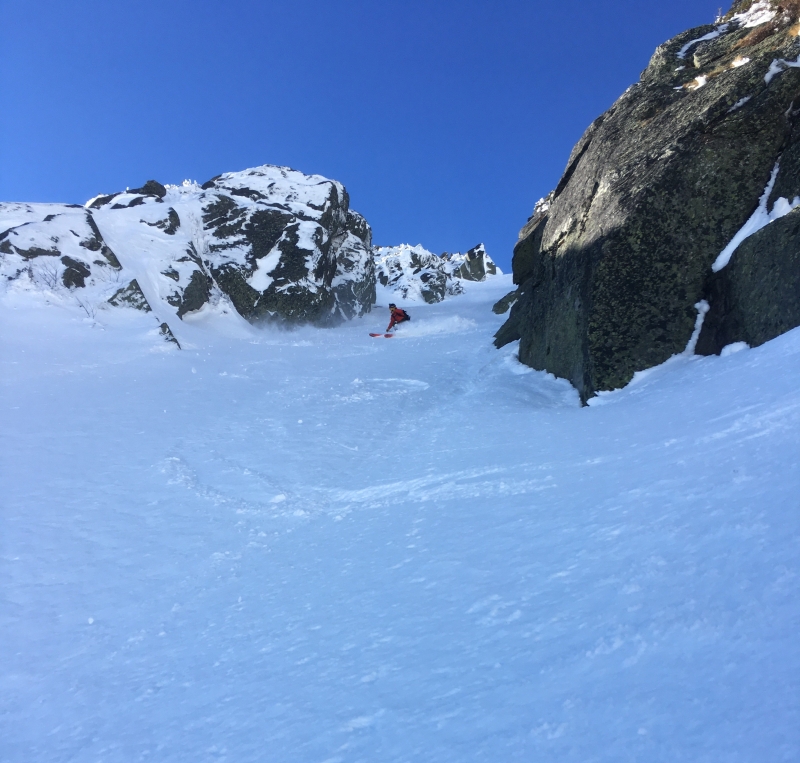