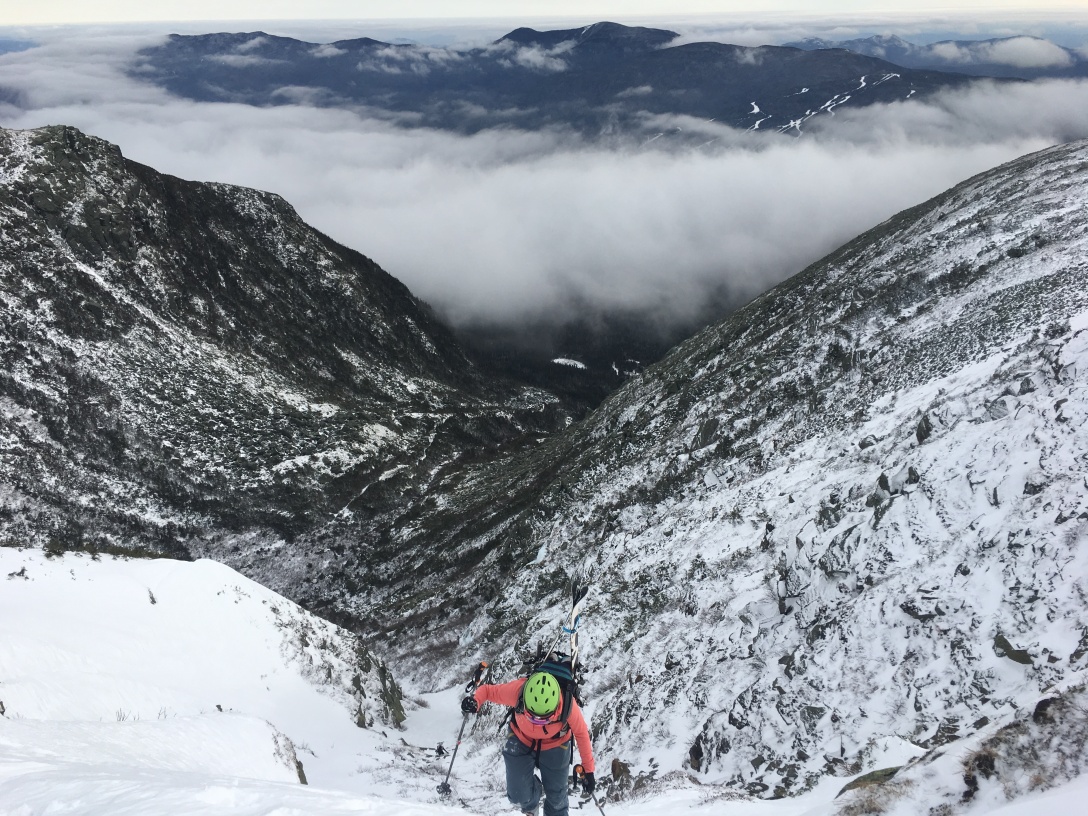 (Beth topping out in Left Gully)

“When was the last time you skied in an all female group?” My mind raced searching for at least one example in which I was the sole Y chromosome among my ski partners. I couldn’t find one, so I lied. “Umm, I think once a while back when I was living out west……maybe.”

Recently, someone proposed the idea that backcountry skiing is becoming too complex. As I listened I quickly became aware of a common refrain that I hear expressed in other domains of life, which is, why do we have to disrupt the status quo when it is currently working well for me. Or, but this is where I go to get away from “politics.” Part of me understands this latter sentiment. Nature (mountains in particular) is where so many of us go to leave the tension, artifice, and complexity of modernity behind. I get that. However, the counter argument is more compelling, and ultimately socially responsible.

See, the initial argument only works if skiing (insert fishing, surfing, climbing, etc. here) exists in a social vacuum void of the inequalities and policy failures we experience in other domains. It doesn’t. Thus, the argument that I don’t want my skiing mixed with “politics” is simply a demonstration of one’s privilege. Yup, I went there….I used the scary “P” word. What does privilege look like? Well in my simple understanding it boils down to whether or not someone has to develop neural pathways (and perform corresponding behaviors/actions) to navigate a system that another group(s) doesn’t. For example, as a six foot tall Caucasian man I have never had to think about carrying mace when I go for a run at night (note: nor have I ever had to ask myself whether or not my running shorts will garner unwanted attention). That, at its very basic, is what privilege looks like. It doesn’t mean I didn’t work hard on my run, it just means someone else had to work harder (emotionally, cognitively, and perhaps physically) to do the same thing. Accordingly, who is and isn’t present in our skiing groups becomes a matter of equity and fairness, which at the end of the day is a goal I think most people support.

(The lady posse kicking steps all the way to the top)

Now, with all these ideological soapboxes piled high I am beginning to feel a little puckered. So, I will take this opportunity to knock myself down a few pegs.

My wife and I recently traveled back to Connecticut to visit family for Thanksgiving. When I return home I am fortunate to have access to great fishing at my parents’ respective houses: one with close proximity to rivers and trout, the other with access to the ocean and striped bass. Understandably, it is standard practice to always travel with a 5wt and 9wt ready to go the moment I sense taking some “me time” is acceptable.

Over the past few years I have had the good fortune of having my nephew join me on these short retreats to the water. It has been fun watching his innate enthusiasm for fishing continue to grow and develop. However, during the recent return home I noticed my implicit inclination to include my nephew was far stronger than the one driving me to include my niece (despite the fact that she is now almost the same age as when her brother started to fish with me). My supposed liberal, snowflake, coastal elite “wokeness” was all of a sudden put on notice. Yet, this is exactly how hidden biases manifest and ultimately perpetuate privilege. Most of the time the empowered (yes, my hand is up) don’t even realize they are benefiting from it, and neither are they aware of their continued promotion of norms that limit others’ access to resources (whether that be a fair wage, renting a house via Airbnb, or super sweet powder turns).

So, having recognized my blind spot I made sure to include my niece when we went fishing. It was during this experience that I was treated to the best example of fairness that I could hope to witness (at least among 4-6 year olds). Standing on the dock casting for late season striped bass we immediately got a flurry of strikes, and even a few “long distance releases.” It was obvious that landing a fish was somewhat inevitable (so I hoped).

Now, my nephew is the “fisherman” of the family however it was his sister who brought home the first striper (on a fly no less!). So, what was his reaction as he watched this little girl haul in a beautiful schoolie?? Nothing short of pure, unfiltered enthusiasm. He started yelling to everyone within earshot that the fish was “AMAZING”…..screaming for his mom to come down to the water to see what his sister had achieved. He didn’t get jealous, he didn’t wonder why he hadn’t caught a fish, or that it was somehow unfair. He simply celebrated her success, and then, when all the pictures were taken and the fish safely returned, he proceeded to fish again. As luck would have it he promptly caught his own schoolie (note: also on a fly) and then celebrated his catch with equal enthusiasm.

Look, I’ve never taken a women’s study class, I still don’t really know who Gloria Steinem or Betty Friedan are, but I understand the basic tenets of modern feminism: to create social systems in which all people are treated fairly. Seems like a pretty good idea to me. Interestingly, this is a strikingly similar message I received in what were overtly masculine learning environments. Work hard, be fair, act like a gentleman (note: break that word in half and really look at what it rewards men for being (hint: it isn’t aggressive)), and if you are going to do something you better do it the right way. This is includes skiing.

So, what happened on this anomalous tour in which I was the minority? Well, we skied hard (on the up and down), made some fart jokes, gave each other shit, I tried to keep pace in a steep boot pack, we made smart decisions, and generally had an awesome time. I’m not trying to self-congratulate (my implicit biases are still numerous and probably unknowingly strong) or wag fingers from atop my very high horse. However, I do want to leave places better than I found them, and more specifically, to ensure that in a few years my nieces and nephew will feel equally welcomed, supported, and respected in the mountain community that has come to mean so much to me. So, moving forward I will continue to shred, schralp, throw loops, and flail on waves with whomever wants to go…regardless of whether they pee standing up or sitting down. Furthermore, if Nature doesn’t discriminate who can arc powder turns, hook into fish, and ride glassy waves, then neither should we.

(Snack time with Hannah and Hanna) 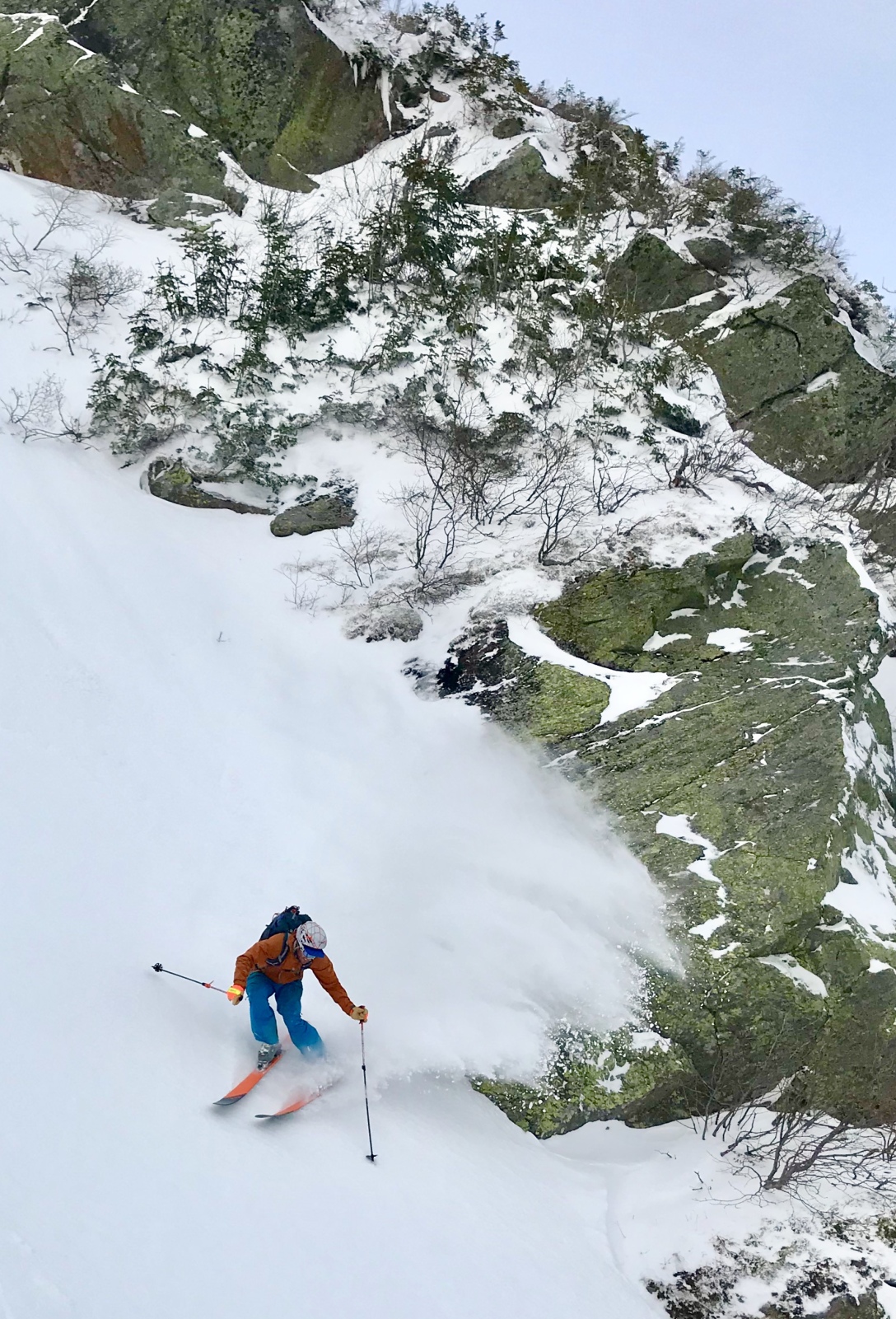