Wow. This is really happening. With all the fancy gear and expensive plane tickets, the best option we can come up with for “camping” is sleeping under this bridge.

This isn’t hyperbole, or bending the truth. Night one of our road trip was literally spent under a bridge somewhere on the outskirts of Portland, OR. However, in defense of modern engineering, our concrete and steel tarp did prove to be quite effective at keeping us dry during a late night thunderstorm storm. Moreover, the ground was surprisingly free of glass and other sharpish objects. Those variables combined with the fact that neither John nor I had slept in 24hrs meant that our “Rambo camp” ended up being a great place to sleep. 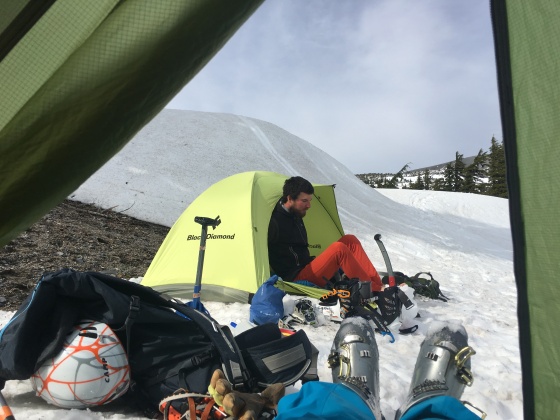 Truth is we didn’t really have a detailed plan as to what we would do with our two weeks of freedom. In very basic terms we wanted to ski and climb as much as we could. So, western Oregon with it’s numerous snowcapped volcanoes, and enough dry, vertical rock to last a lifetime of pulling down, seemed like a good place to start. However, before we could do any adventuring we needed a means of transportation. Yes, we flew to the other side of the country without a way of getting from point A to B.

The wonders of the internet helped John narrow down a list of Toyota trucks that might serve us well…… and would hopefully get him back across the country (note: at the time of this writing the 93 “yota,” successfully made it from OR, through Canada, and back to Camden, ME). After test driving a few rigs, John ended up buying a pickup from a kid who didn’t seem old enough to drive let alone own such a nice vehicle. Next up on the list was finding a topper (this required a small detour up to Washington, and a night spent in a place that has to be where they filmed Jurassic Park), and a big run to Fred Myer for “supplies” (think Olaf beach towels and Annie’s Mac & Cheese). After all the errands were completed we made one last stop for some sandbagged, greasy cragging in Portland. After being serenaded with smooth Jazz (Portland climbers are classy folks) and flailing on weirdly graded routes we decided it was time to start making our way south. The following two weeks unfolded not according to plan, but rather according to needs.

For efficiency and safety, as well as ensuring an enjoyable outing, one should always diligently plan for trips into the backcountry. However, when you get to the point in the season when you know exactly where your lucky cliff bar is hidden, or how many breaths it takes to inflate your sleeping pad, and you can accurately pinpoint physical and mental boundaries, you gain a whole lot of decision-making freedom. This is when less planning equals more fun. You aren’t committed to a narrow field of what “should happen.” Instead, you can look at the environment and focus on the line or the route that is actually drawing you in. You can attend to that aspect of the natural world that for some reason makes sense on that day and in that moment. This is why wherever I may roam was climbed; pearly gates became the best option up Mt. Hood; and some random steep line on the south sister was skied.

(Sidik stretching out the fingers after some fine crack climbing)

Looking back on it sleeping under a bridge foreshadowed how the rest of the trip would unfold. A healthy mix of unexpected experiences that at times seemed uncomfortable, but ultimately provided exactly what we needed.

(Sideways snow and rain = down days)